Someone shared with me a few fears, and I suggested they look at the Mother of all fears – Fear of Death. Fear of Death is that ‘no self’ fear, but most folks tend to take it literally – no self as in now, in this life. Well, it is simpler. In death no ‘you’ is forever. Gone, never to be again. And if you think why the ancients paid so much attention to death… well, they were bothered by the same considerations; human concerns haven’t changed that much over the past few thousand years.

My correspondent came to some pretty spot on insights, such as this one:

I don’t think I will ever know what death is, if it’s nothing I will never be there to see it, if it’s reincarnation THIS won’t be THERE to realize it.

OK, there is still a glimmer of hope in the above. Of carrying on beyond death, further, in some possible future form. Yet, somewhere deep inside we are all aware there is no hope of ‘incarnation’. ‘Forever’ means ‘forever’.

Death awareness is THE Gateway  to shifting one’s perspective on Life. Jed McKenna books paid death enough attention for good reason. But it has to be one’s own inner realisation, perhaps on the same devastating scale as it happened to Ramana. From my conversations with people it is very obvious who has experienced death awareness on the level necessary to internalise it so that one could live life without looking over one’s shoulder much.

I replied to the email with the following:

“You are spot on in your reflections.

It is possible to live life in safety and live very long. 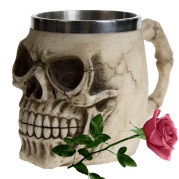 It is possible to live life in danger and live very short.

It is possible to live life in safety and live very short.

It is possible to live life in danger and live very long.

It is an unknown. Which one will be yours? Who the hell knows. One thing for certain – whether you end up living dangerously or safely – you will die regardless.

And yes, that is all there is. No second chances, no incarnation, and even if I were to admit such a possibility, DESPITE the medical, biological, physical knowledge we possess now (unlike our guessing ancestors), what incarnates is not ‘me’ as you wisely observed. It will be a rock or a flower or a droplet of water or a tiger’s anus.

But. I don’t see any possibility of surviving own death until we get to the technologically advanced stage of proper bio-engineering. You and I have missed that train by a margin of at least a few future generations.

Now.. do you still want to feel anxious about that tomorrow’s job interview or your partner giving you the look or… whatever?

Sad, but true. You will not know death, no. You will know dying if you are unlucky. And if you are lucky – you will have an instant heart attack.”

Most of you do not experience the real deprivation in the way you live right now: bombs exploding around you every hour, starvation from days without food, being in constant agony from serious physical pain, limited supplies of water, labouring after every little scrap of food, living under the immediate threat of death and torture and so on.

Also… 100,000th person happens to expire at 18hr 52min 22sec. Below is a twenty-four hour real-time animation, to give humans an idea of the scale and to get them in touch with own mortality. The equivalent of a medium-sized town population is wiped out every eighteen hours.

Place your life in (real) perspective and see how far it can take one.

4 thoughts on “Mother Of All Fears – No You”